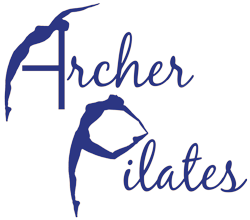 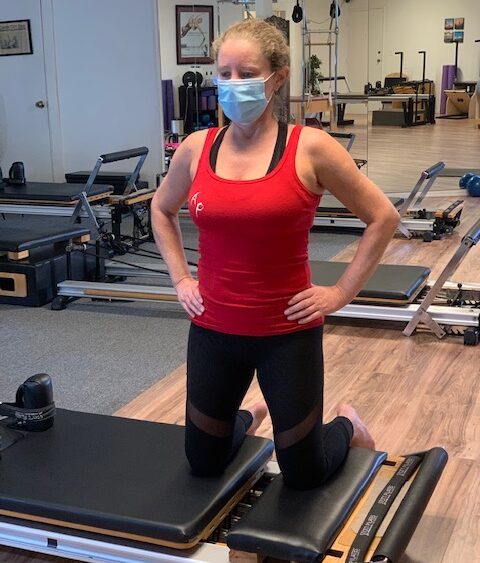 I really felt like I had turned a corner in my recovery as I entered week six.

I was able to translate all the exercises from Physical Therapy to the studio’s Pilates equipment and I felt strong. There were even a couple of days that I had no pain at all. My surgeon said I was doing great and to continue PT twice a week and my own rehab every day.

I had stopped the anti-inflamatories and was told if I needed them again I was overdoing it. I was very happy to get back into the studio to do my rehab on the days I didn’t have PT. I worked all the surrounding muscles of the hip joint. Above you can see the inner thigh work on the Reformer.

I did lateral leg extensions (see photo) on the Cadillac with low leg springs to strengthen the abductors (outer thigh), hamstrings, and glutes. These also helped with my balance and stability on the opposite side. This exercise combined the squat and flexband around the knees that my PT had done with me previously (as described in the previous blog).  I tried to do three sets of everything unless I felt discomfort in my hip.

I was finally able to do some of my favorite Pilates exercises again like lunges. These are not supposed happen technically until 12 weeks, but because the reformer glides and I don’t have to step forward or back into the lunge my surgeon and physical therapist said they were fine. The first time I did just a couple to be sure of no impingement, the second time I did ten on each side and the third time I did three sets of ten. I think I made a mistake the third time and unfortunately had a set back. The next morning I was pretty sore and swollen and my physical therapist wouldn’t let me do any exercise at all.  I was thankfully still able to do the bike each morning, but no other rehab because my hip was angry and inflammed. I increased my routine of ice and took the anti-inflamatories.

I’m not certain the lunges created the problem as I also did Skating on the Reformer the same day as part of my rehab. I felt so great that day, but paid the price for the next few days. I really thought my body was ready and would have told me during the workout if I was overdoing it.  Apparently not!!! More to come in the next blog.